TLA engaged Brenda Thompson Communications to create a bold public relations plan to encourage Texas legislators to restore some of the devastating funding cuts made to libraries, to demonstrate the widespread support for libraries, and to inspire participation by Texas Library Association members.
(Watch the video here.)

Creating a drumbeat of support 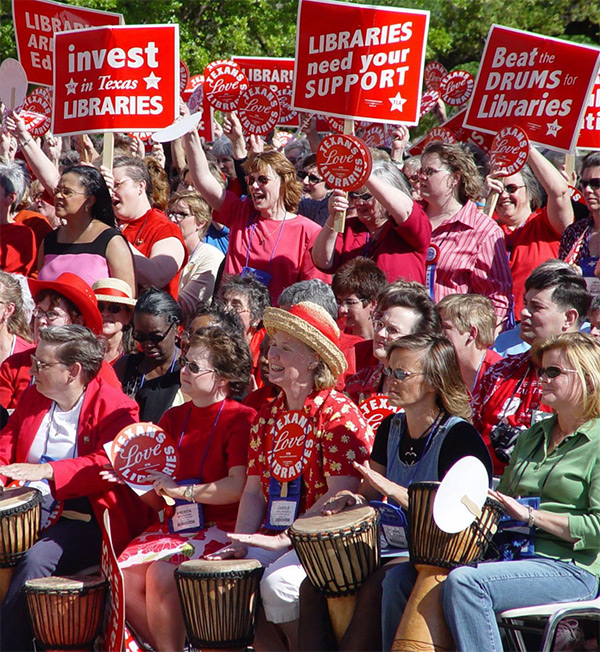 For the first time in 40 years, the association’s annual conference was being held in the state capital–providing an ideal opportunity to involve members in a grassroots effort. The idea for the Rally for Texas Libraries was born, with the theme “Get Texas Libraries Out of the Red!”  Brenda Thompson Communications planned a six-month public relations campaign to create a drumbeat of support leading up to the first rally on April 6, 2005. Tactics included communications with key legislators, editorial board meetings at the state’s major newspapers, a series of news releases and story pitches, and using the association’s communications tools to motivate members.

The Rally itself presented the most exciting opportunity of the campaign to “Get Texas Libraries Out of the Red!” The event was designed to be dramatic and visually appealing to broadcast media and news photographers. The Texas State Capitol served as the backdrop for speakers, who looked out onto a sea of red-wearing, sign- and banner-waving librarians. The figurative drumbeat became real as Drum Café warmed up the crowd, 100 of whom were provided with drums to create a beat for cries of “Get Libraries Out of the Red!” Speakers led the crowd in chants and cheers, and the crowd responded, spontaneously waving signs, stomping their feet and generally refuting the myth of “quiet” librarians.

The largest Rally ever at the Capitol

The campaign to “Get Texas Libraries Out of the Red” exceeded TLA’s expectations in nearly every way. During the Texas legislative session, rallies, protests, and other gatherings of like-minded persons at the Capitol are a daily occurrence. Through careful planning and compelling messages, we were able to make the event stand out and attract the largest crowd ever seen at the state Capitol. Results of the campaign included:

Important intangible benefits also accrued from the Rally for Texas Libraries. Participants reported being truly inspired by the speeches, the size of the crowd, and by those around them. TLA members told us that the Rally was an affirmation of the importance of libraries and librarians, and that they felt renewed in their commitment to the profession. The passion ignited at the Rally blurred divisions and united participants. The Rally has already achieved legendary status–people now say “we were there.”

Yet some of the other, less tangible positive consequences of the “Get Libraries Out of the Red!” campaign reverberated for years to come. The Rally in 2005 was so successful, TLA hired Brenda Thompson Communications to put on a similar event during the legislative session in 2011.

“Oh, Brenda, you’re a miracle worker! As a result of your vision and methodical planning, thousands of librarians dressed in red and carrying placards and banners marched to the Capitol during this legislative session, chanting ‘Get libraries out of the red!’ and ‘Libraries are public education!’ This inspiring rally, punctuated with librarians literally beating the drums for libraries, was the talk of the town, and media was everywhere. What an incredible opportunity you created for us to show our collective strength. You are fun, creative, and awesome!”