H2Orange, a new bottled water in a detailed scale-model replica of the iconic University of Texas at Austin Tower, also has an altruistic aspect: a portion of the profits raise money for academic scholarships at UT. Brenda Thompson Communications was hired to orchestrate the launch and ongoing PR for H2Orange, created by Steve Gurasich and Tim McClure, the G and the M in renowned advertising agency GSD&M.

H2Orange represented a first-of-its-kind partnership between a cause-marketing movement and the University of Texas at Austin, and we worked closely with the University before, during, and after the launch.

Our services on behalf of H2Orange included: 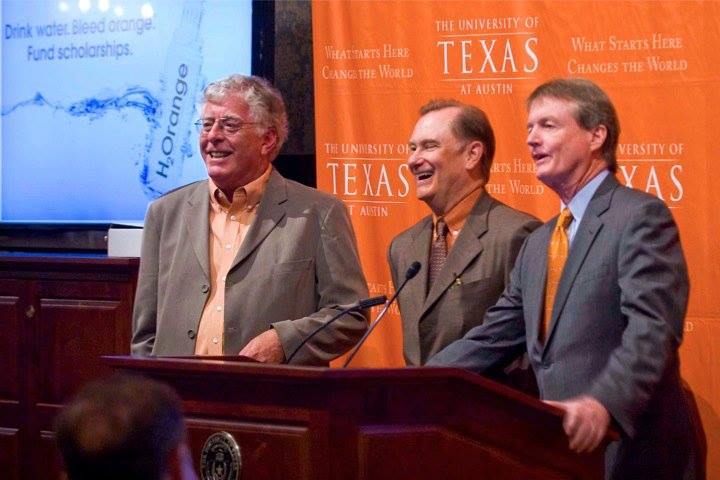 Social media was a major strategy for H2Orange. We created a movement that people wanted to join because simply buying a bottle of water could help fund scholarships. We used Facebook, Twitter, and created an interactive H2Orange website to engage the hundreds of thousands of UT alumni and fans, create relationships with H2Orange’s key customers, and leverage word of mouth.  We also used social media to create interest and demand for the product outside of Texas, through social media fan pages and sites.

Examples of our social media tactics included asking UT fans to send photos of themselves with the bottle at interesting locations around the world, a UT trivia contest using the fun fact items on the backs of H2Orange bottles, and launching conversations about the need for funding for scholarships and how to re-use H2Orange bottles.

We were prepared to answer questions about the environmental impact of H2Orange, and that planning paid off as a number of individuals and organizations took issue with bringing a new plastic water bottle to market. H2Orange’s mantra was “Reclaim. Repurpose. Recycle.” The brand purchased carbon credits to offset the impact of manufacturing and bottling, and discussed plans for a metal bottle in Year Two.

"Brenda Thompson was my first, second and third choice to promote my book, 'Don't Mess With Texas: The Story Behind the Legend'. Partnering up with her again to launch H2Orange Purified Texas Water was a no-brainer. H2Orange funds academic scholarships to The University of Texas at Austin, and nobody knows more about successful PR and product promotion than Brenda. From our news conference in UT's Main Building, to the glitzy launch party in President Bill Powers' office, to relationship-building with the Texas Exes, major grocery chains and convenience stores, Brenda pulled out all the stops to insure a successful launch and continued positive publicity for this powerful brand. Hook 'em, Brenda!"