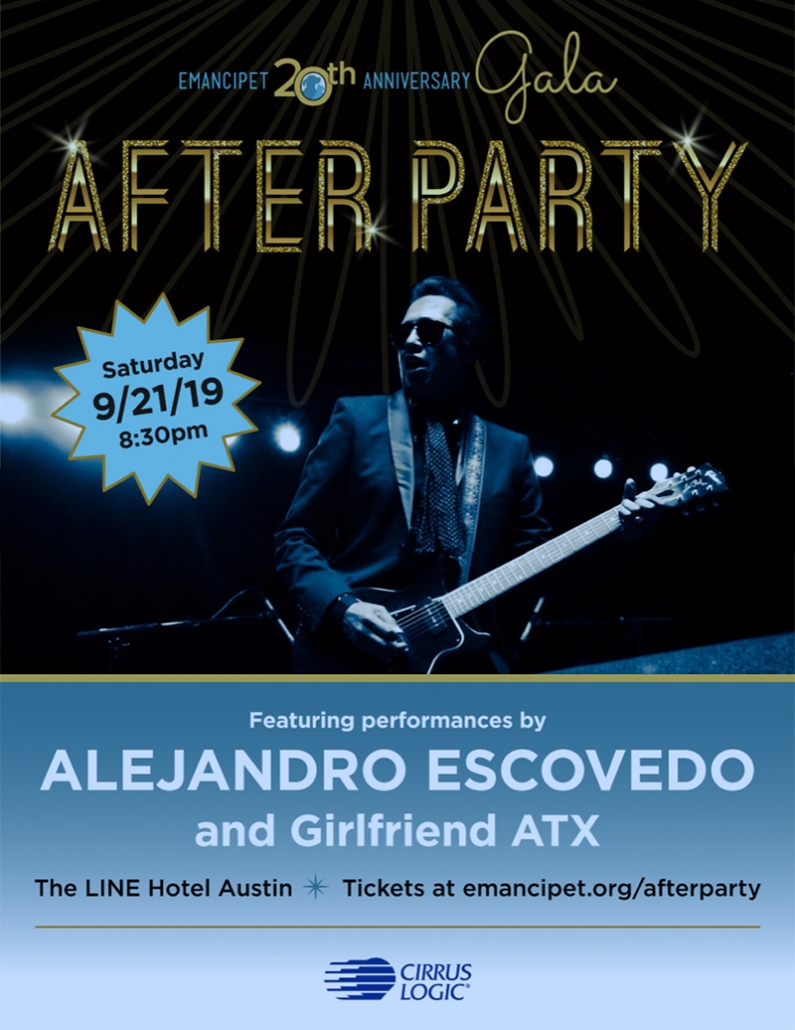 AUSTIN—Celebrating its 20th anniversary this year, Emancipet will have a big party to commemorate the occasion, its first-ever Gala on Saturday, Sept. 21, at the LINE Hotel, with a spectacular After Party featuring performances by renowned Austin musician Alejandro Escovedo and DJ Girlfriend ATX.

Tables and sponsorships are available for the Gala, with individual tickets, if available, going on sale at a later date. The After Party is a separate ticketed event with individual early bird, general admission, and VIP tickets available now; more information about both at https://emancipet.org.

Since 1999, Emancipet has spayed or neutered more than 350,000 dogs and cats and this year will care for more than 100,000 pets. Many of the people who helped make Emancipet’s growth and achievements possible will be at the Gala; there will be several special announcements and surprises during the Gala program.

Emancipet’s mission is to make veterinary care affordable and accessible for all pet owners. To achieve this, Emancipet is building a national nonprofit low-cost veterinary care system, with clinics in underserved areas of Austin, Houston, Killeen, and Pflugerville Texas; and in Philadelphia. Emancipet advocates for public policy that improves the lives of pets in underserved communities, and operates Emancipet New School, which equips and inspires animal welfare professionals in becoming change makers. Since its founding in 1999, Emancipet has spayed or neutered more than 350,000 dogs and cats and will serve more than 100,000 pets and their families this year. www.emancipet.org

Wickedly Trans – Voices from the Rainbow Sept. 21
Scroll to top