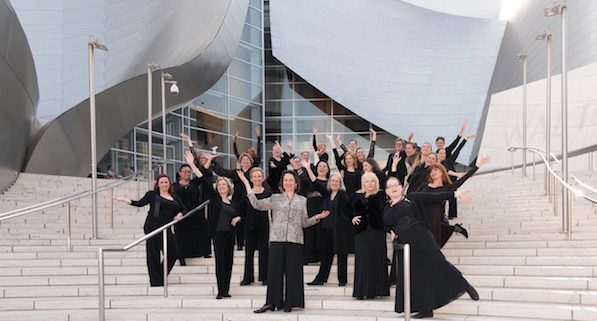 The concert will feature a new work commissioned by VOX for women’s voices, The Journey of Harriet Tubman, which follows Tubman’s courageous life using her own words in conjunction with some of the most important and recognizable spirituals in the repertoire. Dr. Ron Kean, emeritus professor of music at Bakersfield College, composed the piece.

The title role in The Journey of Harriet Tubman will be performed by soprano Caroline McKenzie, a VOX alumna who has been praised by the Los Angeles Times for her “rich timbres and stratospheric range.” The Culver City Middle School Voicestra Choir will join the VOX Femina chorus on stage.

The entirety of She Persisted will take audience members on an emotional journey through music that serves as a response to current events.

“VOX’s vision is to give women voice, and together, we are the voice of our communities,” says Dr. Iris S. Levine, founder and artistic director of VOX Femina. “The political and social climate of the past year has given us an opportunity to dig deep, find our voice, and sing out beautifully and strong. Through our voices, we rise, resist, and build community through music.”

She Persisted features works that evoke the importance of persistence in the face of adversity. They include composer Dale Trumbore’s moving composition “Breathe in Hope,” which began as posts on social media inspired by the tragic deaths of two black men killed by police officers; “And Ain’t I a Woman!” by Susan Borwick, set to an excerpt of abolitionist Sojourner Truth’s speech to the Ohio Women’s Rights Convention in 1851; and “Malala,” composed by Joan Syzmko and inspired by young Pakistani activist Malala Youafzai’s address to the United Nations General Assembly in 2013.

VOX Femina Los Angeles is a women’s ensemble dedicated to the performance of quality choral literature from a world perspective, with emphasis on music by women composers. Through music, VOX aims to create a world that affirms the worth and dignity of every person. The chorus was founded in 1997 by Artistic Director Dr. Iris S. Levine. VOX Femina first appeared on stage as guest artists with the Gay Men’s Chorus of Los Angeles, and very quickly established itself as one of the premier women’s choruses in the United States, with a demonstrated ability to perform a highly eclectic repertoire. The ensemble actively fulfills its mission through an full schedule of performances, touring and educational outreach. VOX Femina has demonstrated its support and encouragement of living composers through the commissioning of more than 40 new works.

Dr. Iris S. Levine, Founder and Artistic Director, is nationally recognized for her excellence in choral conducting. Through her extensive experience with women’s choral literature, and innovative concert programming, Dr. Levine has charted VOX Femina on an impressive 21-year journey, building its prominence in the choral community by way of numerous appearances at ACDA (American Choral Directors Association) and Chorus America conventions, and more than 200 appearances throughout the United States, Mexico and Canada.

Dr. Levine was recently appointed Interim Dean of the College of Letters, Arts, and Social Sciences at California State Polytechnic University in Pomona. Now in her 26th year at Cal Poly, Dr. Levine served as Department Chair and Professor of Music and conducted the Kellogg Chamber Singers, taught Beginning Conducting, Choral Conducting and Music Education courses. Dr. Levine earned her Doctorate in Choral Music from the University of Southern California and she holds a Masters degree in Choral Conducting from Temple University in Philadelphia.